We departed Ugong Rock Adventures to continue on our journey to the underground river. Yet we had another detour: lunch. It was included in the tour we paid (PhP 1500 per person). Lunch was served buffet style, and you’d eat under the shade of a nipa hut. We were surrounded by humble huts where the locals stayed, standing in sharp contrast with the luxury beach resorts in the area, including Sheridan Beach Resort and Daluyon Mountain and Beach Resort. 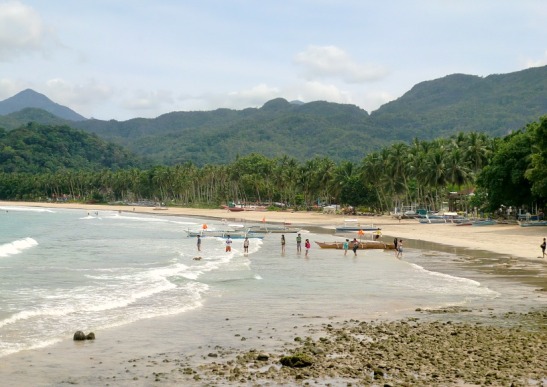 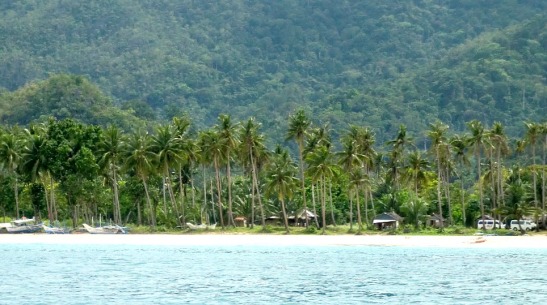 Soon, our tour guide, Gil, collected our IDs to get our permits for the tour, then we were off to Sabang port.

I’m not sure if how easy it was to secure a permit, but I was sure that there were a lot of steps involved that intimidated me. I saw Gil enter an office where the permits were released (the agency placed our requests a month in advance), then he approached somebody near the port who seemed like the dispatcher of boats. In less than half an hour, I found myself in a boat bound for the underground river.

Picturesque scene while on boat from Sabang

Another islet on the way to the underground river

A closer look at one of the islets

Upon reaching the beach where the entrance of the underground river was located, Gil handed our permits to another staff. We were asked to wait since there were still a lot of people at the mouth of the cave. Gil showed us where the monitor lizards of Palawan roamed freely — they seemed to be treated as pets here!

After a few minutes, Gil led us to the path to the mouth of the cave. It was probably less than a hundred meters from where our boat docked. After a short walk, we were in front of the post-card perfect cave. The water was so clear that we could see the fish swimming. It seemed that they weren’t intimidated by the presence of human beings. 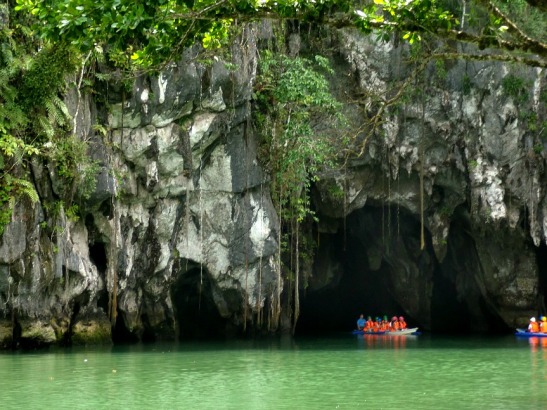 Look at how beautiful that is! 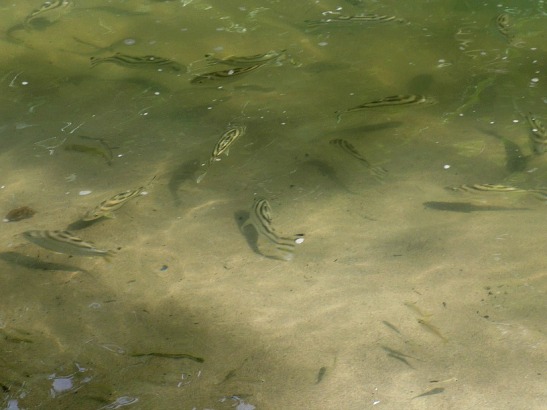 Very clear water at the mouth of the cave – Can you see the fish?

We had enough time to roam around the area before we boarded our paddle boat. With helmets strapped on and life vests worn, we were ready to see the underground river. Every tour group has its own boat, and every boat elects one person to hold the flashlight to highlight the rock formations inside. The boatman also served as the tour guide. (Gil was left behind from where we boarded the boat.)

Underground River tucked behind the trees 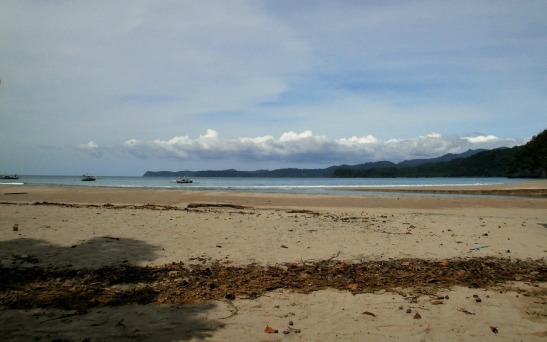 Peace and quiet near the Underground River 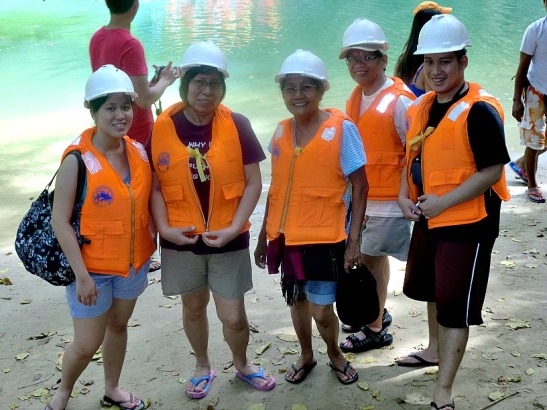 Ready to see the Underground River

Our tour group in the paddle boat

I’ve read in other blogs before leaving for Palawan that the success of your Underground River tour highly depends on the person holding the light. That person should be listening well to the boatman to determine where to point the flashlight, and when he fails to do so, the river tour becomes less successful.

True enough, while I was so excited to see the stalactites and stalagmites, the one responsible for the light in our group hardly paid attention to what the tour guide was saying — I could hardly see anything inside, and where he was pointing the light was not too spectacular. As we went deeper into the cave, however, the person holding the light took his responsibility more seriously, hence making the tour so much better along the way. The mineral formations were abundant; the guide referred to them as having the shapes like those of vegetables or of the holy family or of animals. Up in the cave were bats which sought refuge in the dark.

Rocky part of the cave entrance up close

Spires of rock formation welcome you into the cave

As we finish our stretch along the river, I became so drowsy. There were moments when I caught myself already dozing off. I wasn’t sure if I was sleepy because I woke up earlier than usual, or if it’s the lack of oxygen inside the cave. I was in between periods of sleeping and seeing the cave when we headed back. Upon exiting the cave, I was squinting my eyes due to the bright sun outside and soon after got a massive headache.

The entire experience felt surreal. I was, after all, surrounded by nature’s best.  I was standing at the lagoon where the salt water met with fresh water. I was at awe with the rocky entrance luring tourists of its magnificence. I was dazzled by the mineral formations that took hundreds or even thousands of years to create.

The underground river is, indeed, one great wonder of nature.

Honda Bay will be up next time. Happy travels!

10 comments on “Puerto Princesa: Boating on the Underground River”