A Weekend in Baler

A weekend and an ambition to learn to surf brought me and my friends to a fourth-class municipality in the Philippines: Baler. Initially, we had to choose whether to hire an agency to bring us there or to simply do the job ourselves. Going with the latter proved to be not only cheaper, but also more adventurous!

How to get there

Baler is about five to six hours from Manila by bus. Genesis Transport has daily trips going to Baler. Book a Joybus for a more comfortable seat (PhP 700). Contact them here.

Unfortunately, though we were able to book the Joybus going to Baler, we were unable to book seats for the bus back to Manila. If we were to take an ordinary bus, we would have to leave town on Sunday morning, meaning that we officially only spend an entire day in Baler. Since we were seven in the group, we just opted to hire a van to bring us to Baler. Anyway, we would also need a transportation getting around the town. We paid around PhP 11,000 for the entire weekend’s van rental, including the driver’s fee.

We left Manila shortly after midnight, and we found ourselves in Baler shortly before sunrise. 🙂

On time for the sunrise

Feeling cold and lacking sleep (the roads were bumpy and our friend Jules kept on talking in the van!), we braced ourselves to watch the sun rise. ‘Can we really do this? Can we ride the waves?’ were my thoughts as we hear the waves splash against the shore, pertaining to Baler’s attraction that brought us here: surfing.

As the sun rose and people began emerging at the shore, we changed into our rash guards and board shorts. We were ready for a new experience! 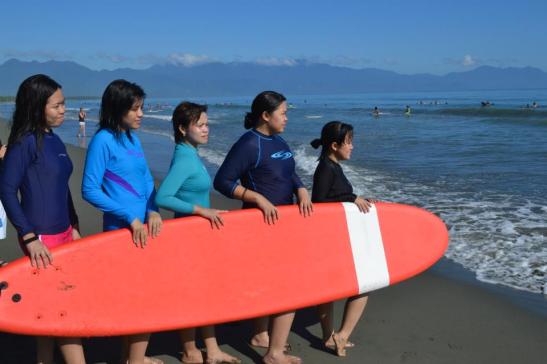 All under an hour, we were taught how to stand in the board, tried standing on the surf board, and fell in the sea somewhere before the board reached the shore. It was tiring, yet it was a great experience!

After surfing, it was time to explore the town. We hired a guide recommended by a fellow traveler since we knew nothing about the place. First stop was Baler Museum. A few photo-ops and we were off to Dona Aurora’s Residence. Dona Aurora was the wife of former President Manuel Quezon, and to whom the province of Aurora was named after. 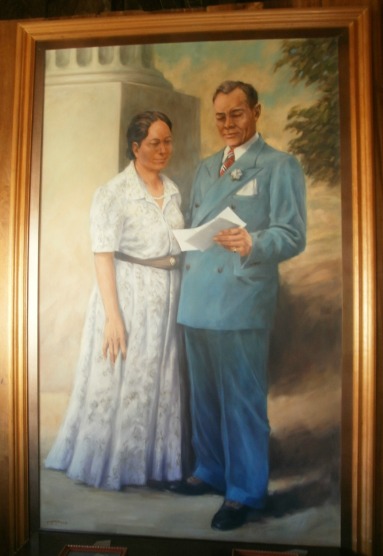 The President and his First Lady

Next, we went to see the biggest Balete tree in Asia. Boy, it was huge! At first, I thought that we’d just take a photo here and there, but I was wrong. We were to climb the entire tree!!! Unprepared, we did it anyway. The girls rocked as the boys didn’t want to do it. 😛

The gigantic Balete tree — can you see how little the people are?

Finally, we headed to the Ditumabo Falls. Since the road was extra bumpy, we had to hire a tricycle to bring us to the jump-off point. According to the guide, it was a about 30 minutes to the falls from the jump-off point. After crossing rivers three times, standing on slippery rocks, and more than an hour, we were witnessing the high waterfalls pour itself over the basin. 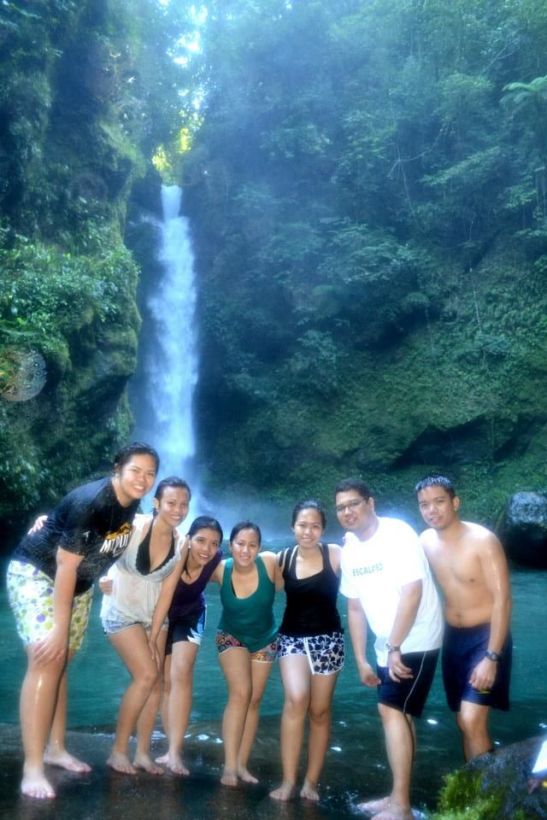 Cold but happy after taking a dip in the water 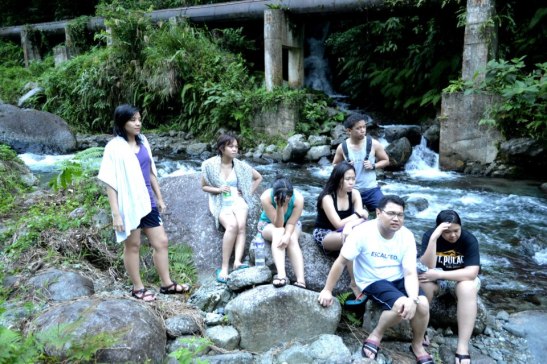 Tired after trekking to Ditumabo Falls

We jumped into the water and found that it was indeed very cold. After a little bit of swimming, we headed back to the town center.

The following day, we were taken to Ermita Hill. Known as the place where seven natives climbed to escape a tidal wave, it serves as a viewpoint today overlooking Baler. See the sandbar emerge in the middle of the sea, while boats line the shore. 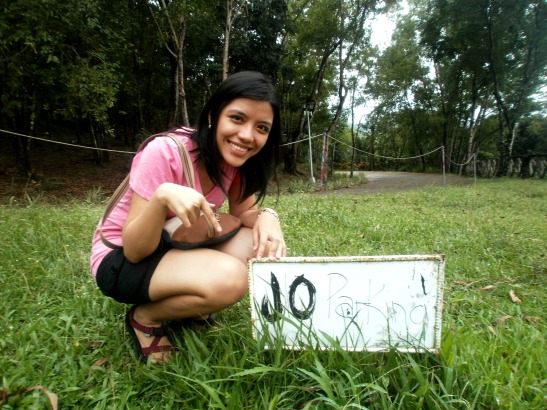 Remembering the seven people who survived the tsunami

Our next stop was another waterfall. The one we saw the previous day was prettier, though it didn’t hurt to see another one. After all, there are no waterfalls in the city. 😛 Aniao Islets was our last stop. The beach was rocky at this point, yet it was one of those beaches where you find yourself reflecting about life (or perhaps I was just sad that we were leaving this town soon). 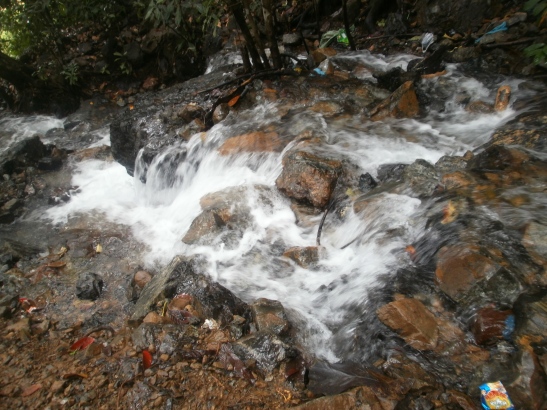 We decided to stay in Bayler View Hotel. It’s one of the most affordable options in Baler, with a room for four costing only PhP 2600. The room was good enough for our needs. In addition, they serve good food.

Though I’m a bit a biased since we stayed here, I would recommend this hotel for food. Their prices are decent, and they serve really good food. 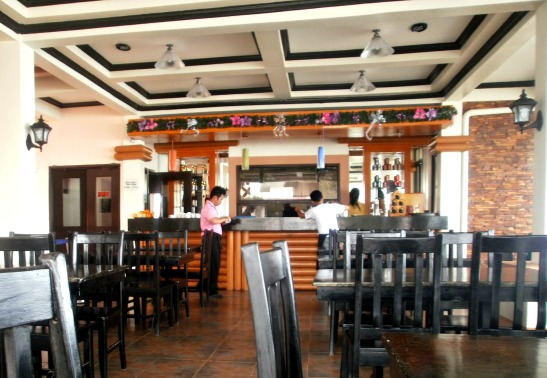 The yummy turon ala mode

It’s time to eat all you can! After a long first day, our guide suggested that we try this place. Nothing fancy, but they serve a lot of dishes. I loved their papaitan, a delicacy where bile is added to the soup to render a bitter taste. I was cold, and I needed some hot soup!

This is the upscale hotel in town. Despite the numerous people in town, the restaurant was empty when we arrived there! The place was nice — more formal compared to other restaurants we’ve tried. Food was a bit expensive, perhaps at par with Manila prices. The wait time was way too long. However, their chicken tinola was one of the best I’ve tasted. The addition of coconut juice to the broth really rendered a good flavor. 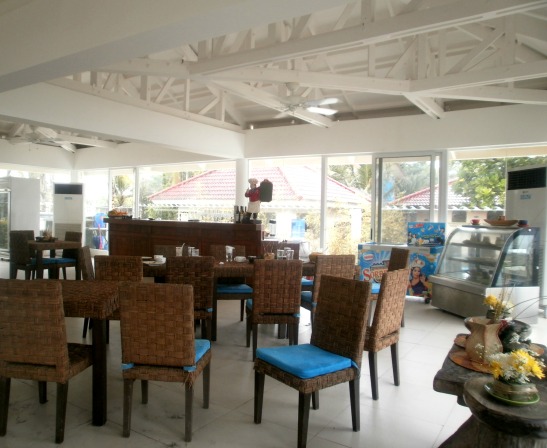 View from the restaurant

Perhaps this was one of the best value trips we’ve ever had — a ton of adventure for just under PhP 5,000 (USD 100)! Wish we could go back there some time soon.

Special thanks to my friend Aiza Buenaventura for lending me some of the photos used in this post. 🙂

13 comments on “A Weekend in Baler”

This entry was posted on April 28, 2013 by Karen in Aurora and tagged adventure, Aurora, lifestyle, nature, Philippines, photos, surfing, travel.