Temples and Ruins in Ayutthaya

I was feeling a little bit hungry by the time we finished visiting Bang Pa-In. I honestly thought that we could find some decent place to eat outside the palace grounds, but all we saw was a small eatery by the side of the road. We didn’t eat, and got ourselves a tuk-tuk instead.

Tightly squeezed in a tuk-tuk

At first, we only wanted to be driven to Ayutthaya, since I knew that there were lots of transport options once we arrive there. The driver was charging us THB 800 for the trip, which I felt wasn’t fair. Like any haggler, I walked away (yet deep down I was already scared that we wouldn’t have any other means of going there). He gave in to the price I requested – I already forgot how much but it was probably 400 baht – then we closed the deal by adding a half-day tour. Our tuk-tuk cost us 900 baht in total, including the transfer and the tour. It was a pretty good deal considering that a half-day tour alone was at 1000 baht according to my previous research.

The first temple we headed to was Wat Yai Chai Mongkol. Oh, how plenty can the people get! It was a Buddhist holiday, after all. The good thing was that we were able to witness some traditions that we otherwise would not have known.

We followed the crowd who were entering the pagoda. It was like an oven inside. Sheez. But here, we saw Thai people sticking gold to the Buddha statues. 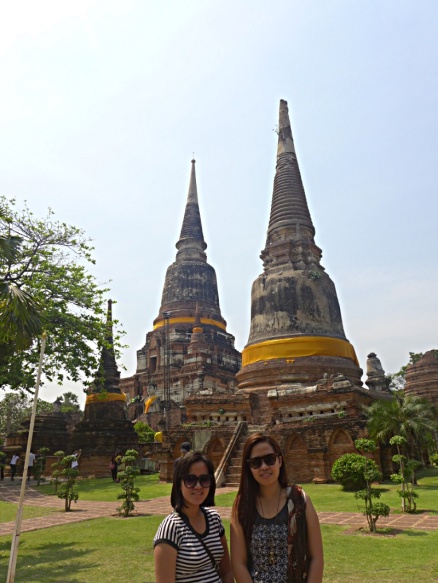 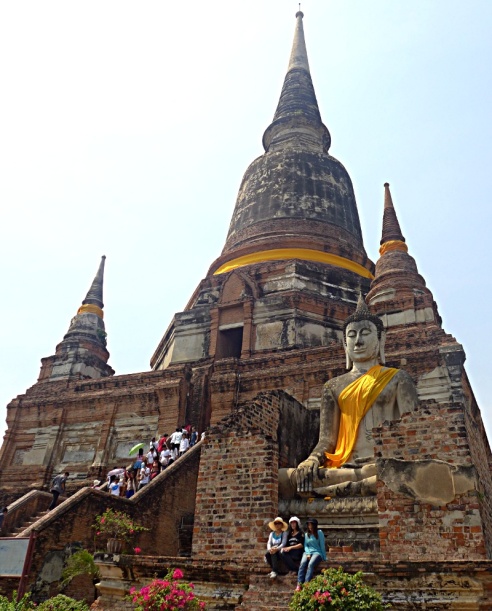 We went down from the temple and made our way out of the complex, where there were a lot of vendors selling flowers and incense for offering. We grabbed some chicken balls along the way to the parking lot, where the driver was waiting for us. They weren’t too delicious, but they were definitely more than enough to give us some energy we badly needed! 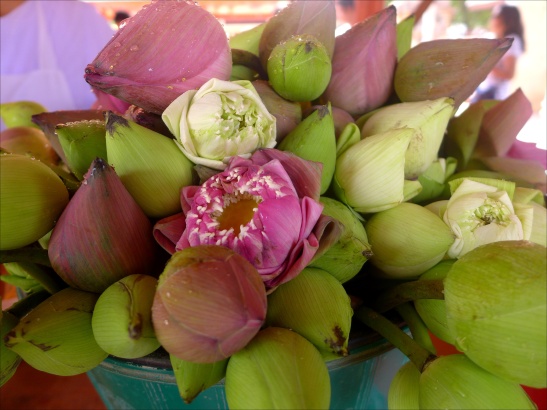 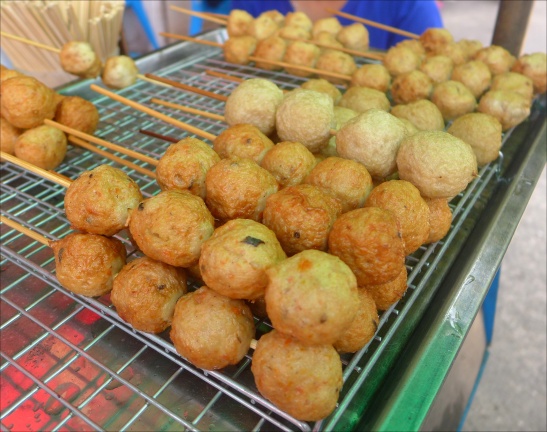 Our driver then took us to Wat Mahathat, where the famous Buddha head nestled in the tree roots was located. Make sure that your head is lower than the Buddha’s when taking a photo.

The temple grounds were big enough such that you can have an area to yourself. That seemed to be rarity when visiting temples on a Buddhist holiday 😉

Don Jules and the girls

Lots of restoration going on! 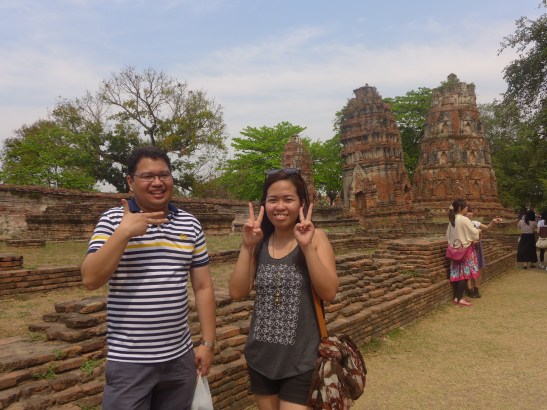 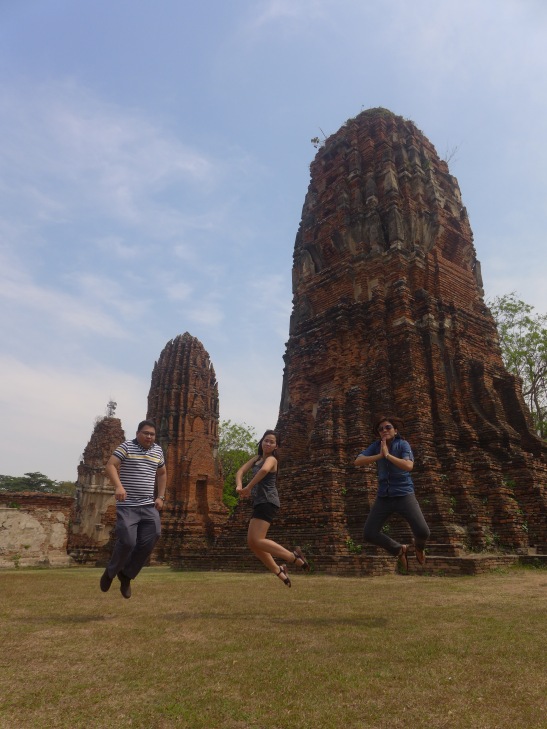 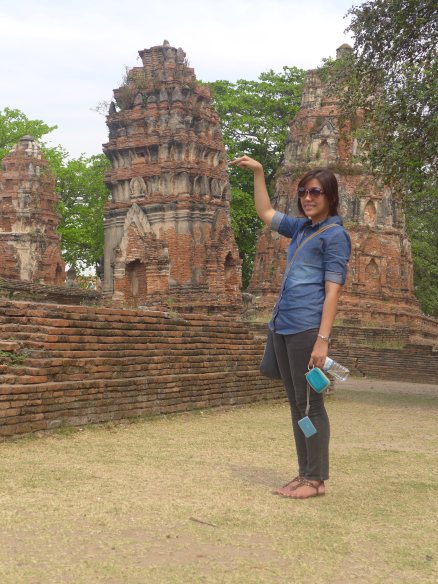 Three big stupas would grandly welcome you. Unfortunately, I didn’t find anything interesting apart from that. Moreover, the stupas were clearly reconstructed, which disappointed me. Hello, cement! 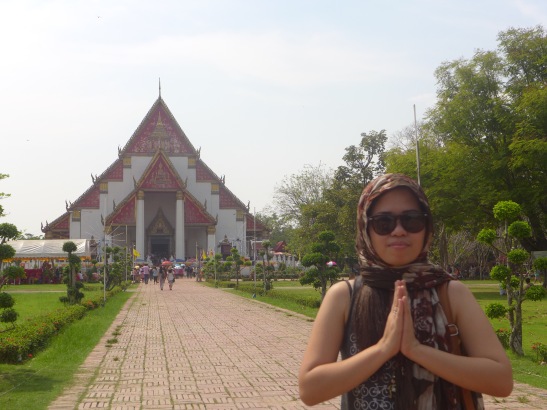 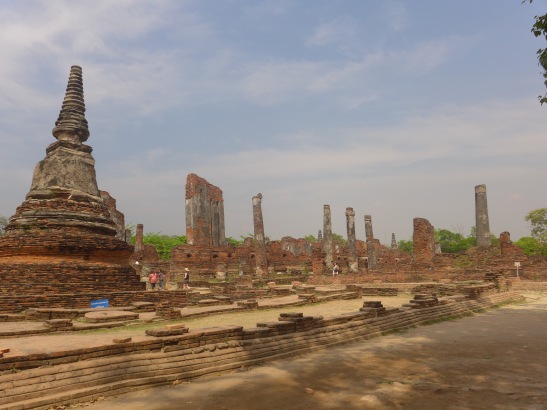 We contented ourselves with resting under the shade of the tree, while imagining how the whole place looked like centuries ago. Plus, we treated ourselves to some coconut ice cream on the way out.

We then went to the Ayutthaya’s Reclining Buddha. It seemed that the statue was dropped out of nowhere to this place. However, this was where it felt most touristy, with photographers taking your photo without your knowledge and selling them to you later on, and vendors pushing various goods for you to buy. Yet, you’d occasionally see locals offering flowers and incense to the Buddha. 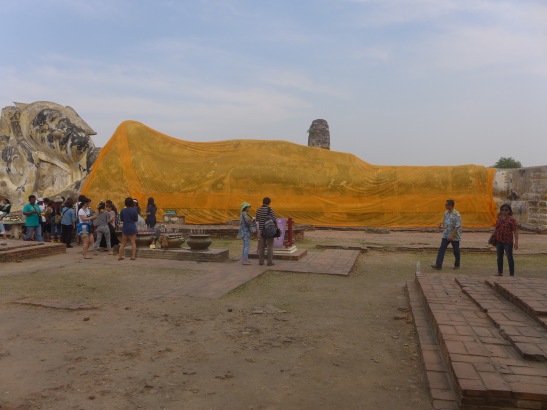 Lastly, we went to another temple housing another big Buddha statue. I can’t remember the name of the place, yet it was also quite crowded.

Afterwards, our driver brought us to the minivan terminal. For only 70 baht per head, we were on our way back to Bangkok. We were already very, very hungry at this point. Good thing that the terminal was near the Victory Monument, which was also near the hostel we were staying at.

It was a long and tiring day, especially that we woke up very early and had no decent meal in between!

More on our Bangkok adventure next time! Happy travels 🙂

4 comments on “Temples and Ruins in Ayutthaya”

This entry was posted on June 5, 2013 by Karen in Bangkok, Thailand and tagged adventure, Ayutthaya, Buddhism, friends, photos, temples, travel.